We went to Coleg Trefeca near Talgarth for a weekend thinking about ‘Hope in the face of evil’, led by John Lampen.

John Lampen and his wife Diana  have been Quakers for almost fifty years.  They began to learn about peace-making by working with emotionally disturbed adolescents in their first job. They lived in Northern Ireland during “the troubles” for eleven years.  Among other work they engaged in dialogue with the police, the British army, the illegal armed groups, the churches, the many peace organisations, and their local community. They were involved in the development of three peace education projects for children in the U.K., and introduced this concept over ten years of training visits to Belarus and Ukraine.  They were involved with the Belarussian Children’s Hospice, occasionally working with children, families and staff.  They have visited and supported local peace projects in former Yugoslavia for many years up to 2012. John continues to be involved with grassroots peace organisations in the mountains of Western Uganda which he helped to found in 1998. He gave the 1987 Swarthmore Lecture, Mending Hurts.  He has written other books for Friends, including The Peace Kit and The Worship Kit for younger teenagers, and Peaceful Inside for children of five to seven.

We began by viewing a film showing how some of the parents of children killed in their schoolroom by a lone gunman in New England, worked through their grief in amazingly constructive ways. A session then followed with the title ‘Why do bad things happen to good people?’; the challenge this makes to a trustful attitude to life and a belief in a loving God, and a consideration of some of the ‘false’ explanations with which we may try to comfort ourselves. A deep place indeed. We were then challenged to ‘Think clearly about forgiveness’; about how it can break the power of the past to determine the future; how ‘forgiveness’ can be experienced as a gift rather than as an achievement. In considering ‘Is the Quaker Peace Testimony an adequate response to the evil in the world?’, John Lampen took on the role of someone who wanted to become a member of the Society of Friends but found the Peace Testimony a stumbling block. We were again challenged, as we tried to persuade him out of his hesitations.In the ‘rounding up’ session, we were confronted with one of Emily Dickinson’s less obscure poems:

Hope is the thing with feathers

That perches in the soul

And sings the tune without the words

And sweetest in the gale is heard

And sore must be the storm

That could abash the little bird

That kept so many warm

And on the strangest sea

Yet never in extremity

It asked a crumb of me.

The above is only an inadequate summary of a weekend of great richness and power, the experience of which may be regarded as a well, to be drawn upon in times of future need. Throughout, John prompted and provoked us (in the nicest possible way) with stories from his vast experience of disturbed, threatening, violent, and seemingly intractable situations. For this writer at least, John is living proof that it is possible both to inject into such situations, and survive them with, grace, faith and hope.

As well as the sessions, some of us walked in the rain, and we all enjoyed hilarious DIY entertainment, including reading a dramatic poem. These things also helped us get to know each other more deeply. 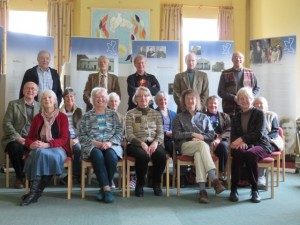 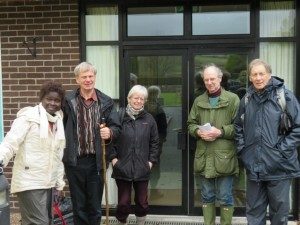 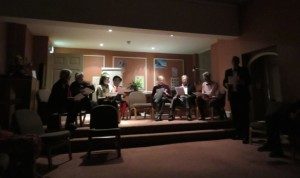 If you have any questions regarding Ludlow Local Meeting please complete the form below.